Manning the wheel behind our Venezie Sporting Goods delivery truck is none other than Patrick Burns!  Patrick, an Ellwood City resident, used to work at Tri-County Recycling where he was a bailer operator.  He decided to make a change and we are SO GLAD he did.  Patrick started with Venezie Sporting Goods as our Delivery/Utility Assistant in August of 2022.  He quickly fit in with the rest of the crew!  His humor brings a smile to us all! 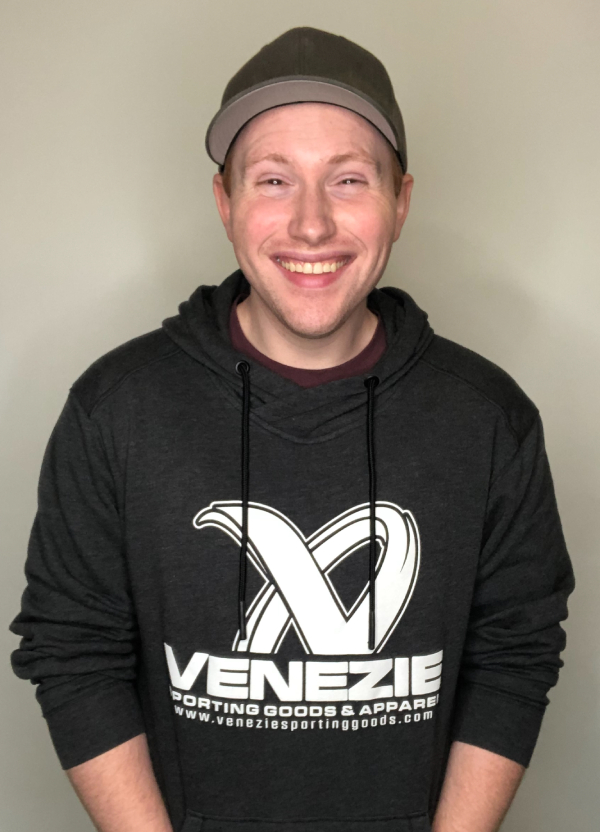 Patrick graduated from PACyber in 2015.  He also attended Ellwood City Area School District and Vo-tech where he studied computer science.

The phrase ‘jack of all trades’ comes up a lot when talking about Patrick’s skills.  He is absolutely a jack of all trades, and we would be lost without him.  He accepts any task we throw at him and enjoys the different things he gets to do every day.  From preparing the screens for our upcoming jobs to deliveries and everything in between he takes it all on with a smile on his face and a big one at that!

When asked about his personal life, he said he absolutely loves his dogs (2 Golden Retrievers and 1 Miniature Pinscher) so getting home to them is the highlight of his day.  Occasionally his family watches other dogs so when there are a lot at the house it makes for an adventure!  He really enjoys video gaming and a few of his favorites are the Fall Out Series, Assassin’s Creed, and Destiny 2.  Building computers has also been something he likes to spend his time doing.  Patrick says he is lucky in that he has two families which consists of his Mom, Stepdad, older Sister, stepsister, Dad, and Stepmom.

The most memorable day so far at VSGA was when we pulled 120 screens out of storage and needed him to recycle them so we can use them for the next jobs coming up – a HUGE undertaking but he got them all done and now laughs about that day!